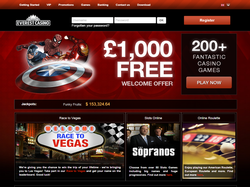 Everest Casino is an online casino also offering baccarat, blackjack, live dealer games, and roulette using Playtech software It is one of 10 online gaming sites owned by Betclic Everest Group. The site's primary language is English. It supports both downloadable software and the ability to place a wager without a download.

Piggies and The Wolf

Kong: The 8th Wonder of the World

Support  - support@everestcasino.com
Support Option  -  E-mail Entry Form, and Live Chat.
Errors/Omissions? If there are any inaccuracies in our data, please Let Us Know!