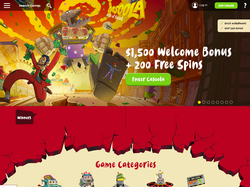 * 20 Free Spins will be instantly credited upon qualifying deposit. Remainder will be credited at the rate of 20 per day for 9 days on Reactoonz. Deposits made via Skrill or Neteller are not eligible for the first four (4) New Player Welcome Bonuses. T&C's Apply, 18+, Gambling Can be Addictive, Please Gamble Responsibly