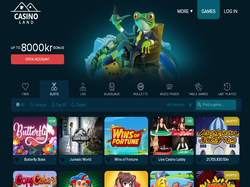 SAM on the Beach

Other sites owned by MT SecureTrade Limited include Cashmio, and Karjala Kasino.