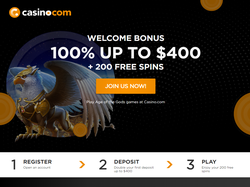 That's not all, you'll also receive 200 Spins! You will receive 20 Spins immediately upon account activation that can be used on ANY "AGE OF THE GODS" slot games.

Upon making your first deposit, you will be eligible to receive another 180 Spins on the same AGE OF THE GODS Age slot games with 20 spins issued per day for eight consecutive days.

* Residents of China are not eligible for any part of this promotion. The Welcome Bonus and additional 180 spins, are only available to players depositing via Card (Credit or Debit), Bank Transfer, Banking Methods. T&C's Apply, 18+, Please Gamble Responsibly, BeGambleAware.org

15 Crystal Roses: A Tale of Love

Get the Gold Infinireels

The Bandit and the Baron

Way of the Tiger

Merlin and the Ice Queen Morgana

Rich Wilde and the Wandering City

Age of the Gods: Wheels of Olympus

Legend of the Ice Dragon

John Hunter and the Quest for Bermuda Riches

Pragmatic Play games live with Mansion
30 Aug 2019
The agreement will give players of the Mansion portfolio access to a suite of slot games, including Pirate Gold, Mustang Gold, Da Vinci's Treasure and Wolf Gold. read more

Microgaming content goes live with Mansion
7 May 2019
The provider's library of content will now be available to players at Casino.com, Mansion Casino, Slots Heaven and Mansion Bet. read more

Income Access is the affiliate program that represents Casino.com. To find out more about the program visit the Income Access profile page.
Errors/Omissions? If there are any inaccuracies in our data, please Let Us Know!