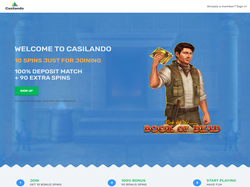 World-Wide Welcome Offers!
Casilando is offering new players from around the world a Welcome Offer! See the offers below.

Significant Terms: UK not eligible for No Deposit Bonus Spins. New players only. Min deposit £10. Bonus spins are valid on Book of Dead only. Bonus funds are 100% up to £300 and separate to Cash funds. 35x bonus + deposit wagering requirements apply. £5 max bet with bonus. Bonus must be used within 30 days, spins within 10 days, otherwise any unused shall be removed. T&C's Apply, 18+, Please Gamble Responsibly, BeGambleAware.org

This Week in Gambling: Spam, BetOnline and more spam
7 Nov 2017
Like spam? Neither does J. Todd. So when he started receiving unsolicited text messages from sites, he knows he's going to have to share. Also, he takes a look at some brand new casino skill games from GameCo. read more