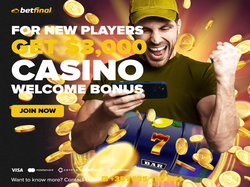 Welcome Bonus: Up to $3,000 in Bonuses!BetFinal Casino is offering new customers up to $3,000 (or equivalent currency) in Bonuses on your first four deposits!

Simply register your player account and deposit $10 or more to claim the bonuses!

* A minimum deposit of $10 is required to claim each deposit bonus. Maximum bonus amount is $3000 when all offers are claimed with the full deposit amount. For each bonus and deposit have to be wagered 35 times within 30 days. Maximum stake per spin in Casino slots is $5. Bonus Offer page & General T&C's Apply, 18+, Gambling Can be Addictive, Please Gamble Responsibly

Eye of the Amulet

Customer Service  - helpdesk@betfinal.com
Support Option  -  Live Chat.
Errors/Omissions? If there are any inaccuracies in our data, please Let Us Know!