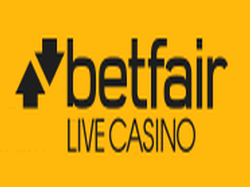 Betfair Live Casino is an online casino also offering baccarat, blackjack, live dealer games, other games, and roulette using Playtech software It is one of 15 online gaming sites owned by Flutter Entertainment plc. The site's primary language is English. A download is not required to place a wager.

countrycode=US
Welcome Offer: 100% Bonus up to £100!Betfair Live Casino is offering new customers from the UK and Ireland a 100% First Deposit Bonus up to £100 to try the Live Casino Roulette and Blackjack games! Simply claim the bonus with a minimum deposit of £50.