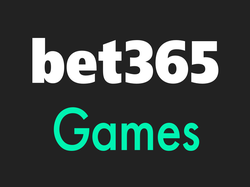 countrycode=US
Bet365 Gamesbet365 Games is offering a 100% matched bonus of up to £50. Get off to a flying start with this New Player Bonus.

Significant Terms and Conditions
1. This offer is only available to new Games customers.
2. Your largest deposit/transfer (minimum £10) to Games in the seven days prior to claiming the offer will qualify for a 100% matched bonus, up to a maximum of £50. This is your 'qualifying deposit/transfer'. To receive your bonus, you must claim your offer and then wager the value of your qualifying deposit/transfer (capped at £50) 30 times on eligible games: Please see Full Terms and Conditions for further information.
3. Not all games contribute towards the wagering requirement, please see Full Terms and Conditions for further information.
4. Any funds that you deposit/transfer and/or any winnings from them can be withdrawn at your discretion without any impact on this offer.
5. You will forfeit the bonus if you do not complete the wagering requirement within 60 days of claiming the offer. Once you complete the wagering requirement, your bonus will be transferred to your withdrawable balance and can be used or withdrawn at your discretion.

For more information about all offers please visit the bet365 website.

Into the Wild Megaways

Book of the Fallen

Biggest spin giveaway ever at bet365
24 Jan 2022
Ar the online casino, 3.65 million spins are up for grabs from 25 January and the campaign will run until the very last spin has been awarded. read more

APCW Perspectives: A potpourri of online gaming news
15 May 2018
The fines have been flowing from the UK Gambling Commission to online operators, and there are more to come. However, the UKGC isn't the only agency passing out the smacks.  read more

Win this weekend at bet365 Games
11 Aug 2017
Receive a bonus of £100 to use on a selection of popular titles after depositing or transferring £20 into a Games account on 12 or 13 August. read more

bet365 Partners is the affiliate program that represents bet365 Games. To find out more about the program visit the bet365 Partners profile page.
Errors/Omissions? If there are any inaccuracies in our data, please Let Us Know!