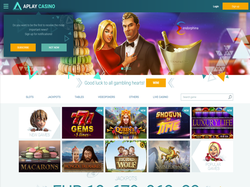 Ivan and the Immortal King

PlayAttack's affiliate contest for Swedish traffic is underway
3 Aug 2020
Affiliates have to possess an account with PlayAttack and bring Swedish traffic to SlotV to be eligible for this competition. SlotV holds an SGA license, and therefore, accepts Swedish traffic. read more

PlayAttack's Mr Bit Casino launches an MGA-licensed version
27 Jul 2020
The brand, launched back in 2018, now acquired a new license from the Malta Gaming Authority and is ready to operate in Europe.  read more

PlayAttack launches a new website
23 Jun 2020
PlayAttack is inviting affiliates to explore the new website they launched for the MGA and SGA-licensed casinos represented by their affiliate program. read more