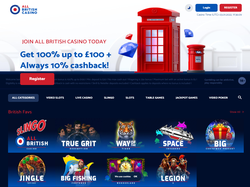 Welcome Bonus: 100% up to £100 + 10% Cashback Always!All British Casino is offering new customers from the UK a 100% First Deposit Bonus up to £100 with an initial first deposit of £20 or more - On top of this, there is always 10% Cashback on lost deposits available!

* For new UK players only; Max bnous is 100% up to £100; No max cash out; Wagering is 35x bonus; Maximum bet while playing with a bonus if £5; Cashback is cash with no restrictions; Skrill and Neteller deposits are excluded. T&C's Apply, 18+, Due to UKGC legislation: UK residents can no longer use credit cards to fund their accounts. Gambling Can be Addictive, Please Gamble Responsibly, BeGambleAware.org

Apple Pay added as option for All British Casino
14 Mar 2022
Every player at the online casino will be able to use this banking method to deposit and withdraw without the need of ever putting in their card details.  read more

Support  - service@allbritishcasino.com
Support Option  -  E-mail Entry Form, Live Chat, and Phone.
Support Line - +44 20-3769-4520
Errors/Omissions? If there are any inaccuracies in our data, please Let Us Know!