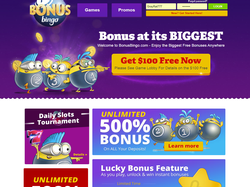 BonusBingo is an online bingo room also offering blackjack and video poker using Mobilots and Parlay Games software The site's primary language is English. A download is not required to place a wager.

Pharaohs of the Nile

Legends of the Sea

Support  - support@bonusbingo.com
Feedback  - feedback@bonusbingo.com
Support Option  -  Live Chat.
Errors/Omissions? If there are any inaccuracies in our data, please Let Us Know!